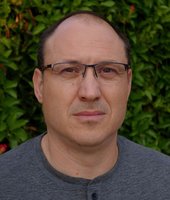 Vladimir (Vlado) Prodanov was born in Sofia, Bulgaria. He attended the Technical University of Sofia for four years before leaving for the US. After spending one year in NY City, working various odd jobs, he became graduate student in EE Dept., State University of NY at Stony Brook. Vladimir earned M.S. and Ph.D. degrees in 1995 and 1997 and joined Bell Labs-Research at Murray Hill, NJ. He remained with Bell Labs (Lucent Tech.) and subsequently with Agere Systems until 2004. From 2004 to 2008 he was with MHI Consulting, LLC. In 2006 Vladimir co-founded Blue Danube Labs, Inc. and served as its CTO for two years. Dr. Prodanov has taught analog/RF circuit design at SUNY - Stony Brook and Columbia University. He joined Cal Poly EE Dept. in 2009 and currently holds the rank of professor.