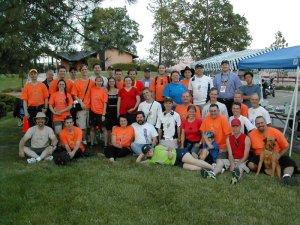 The Electrical Engineering Department supports many student groups and has long recognized the important role that these organizations play in the professional development of young engineers. Each term, the student groups listed below provide numerous professional development opportunities, community service events, and social activities, all of which help to complement the department's formal academic program.

For a list of Electrical Engineering related clubs as well as other engineering clubs, please visit the CENG Students Clubs & Organizations page.

IEEE Student Branch:   The IEEE is a world-wide professional organization for Electrical Engineers, Computer Engineers, Computer Science, Mechanical Engineers, Industrial Engineers and a wide range of other Engineering Disciplines.   The IEEE is the largest technical professional society in the world.  Here is a link to the IEEE professional society.   IEEE    The IEEE has regional professional meetings and the San Luis Obispo Area is represented by the IEEE central coast section.  Where every you go with your career, there is a local IEEE branch.  There are 38 sub-organizations under the IEEE representing the vast areas of activity in the Electrical Engineering field (IEEE Professional Societies)  The IEEE also provides a vast library of technical publications.  There is an IEEE sponsored event or conference somewhere in the world every week of the year.

IEEE Power and Energy Society (IEEE-PES) Student Branch:  The Power and Energy Society is one of 38 member societies of the IEEE and Cal Poly has a very active student branch of the Power and Energy specialization.  The club headquarters in the EE building 20-101.   This group has been very active recently in providing tours to various companies involved in the Electric Power Industry.   IEEE-PES has also brought a wide range of lecturers and hands-on seminars to campus.   Here is a link to the IEEE-PES student branch web site.  IEEE-PES-Student Branch

IEEE  Consumer Electronics Society Student Branch: We all love our phones, smart speakers, and computers that are now an integral part of life.  The IEEE Consumer Electronic Society helps students understand what is behind the cover and how these designs work.   Often times the group is part of a tear-down activity with San Luis Obispo's ifixit company (ifixit web site).  The group also tries to attend the Consumer Electronics Show (CES) in Las Vegas that occurs in early January each year.

Electric Vehicle Club (EVEC): Established in Spring of 2007, EVEC has been formed and spearheaded by students for students to learn more about this developing field of energy. In the short time since EVEC's inception, we have worked together closely with many different College of Engineering departments to garner the support that this multi-disciplinary technology needs

Cal Poly Amateur Radio Club:  The Electromagnetic Spectrum is a World-Wide resource for the common good of society.   The Electromagnetic Spectrum is managed by a specialized agency of the United Nations called the International Telecommunication Union (ITU web site).   In the United States the Federal Communication Commission (FCC) is given the responsibility of managing the many users of the Electromagnetic Spectrum.   The ITU and the FCC allocated spectral uses for commercial, governmental and private use of electromagnetic spectrum.  The amateur radio club is involved with the part of the spectrum that is dedicated to individuals who want to be able to have spectral access for experimental and recreational uses (amateur radio).  The Cal Poly amateur radio club has transmit and receive capabilities over a wide frequency ranges from sub-MHz to Multi-GHz.   It has laboratory and club space in building 20 both indoors and with a wide range of antenna towers in building 20.  The club also has two satellite up link and down link stations for amateur satellite communication.   In order to be able to transmit on the radio spectrum, one needs to get a license from the FCC. The Cal Poly Amateur Radio Club offers regular testing sessions to get your FCC license.   The web site for the amateur radio club is found here:  Cal Poly Amateur Radio Club .   In order to study for the amateur radio examination a good web site to start at his hamstudy.org.  Here is a general presentation on the amateur radio club. CPARC Presentation

Cal Poly Microsystems Technology Group (MST):   Cal Poly has a microfabrication technology clean room in building 41.   It has capability to fabricated semiconductor devices, micro-mechanical systems and micro-fluidics technology.   The MST group has a mission to equip, engage, and excite engineering students to solve global problems through the creative implementation of micro and nano-scale .technologies.  Here is their web site link.  Cal Poly MST

Cal Poly Radio Frequency, Microwaves and Photonics (RMAP) club:   The RMAP club was traces its roots to the the international professional organization SPIE.  The first SPIE student chapter was formed in 1985.   In 2006 the Cal Poly chapter of SPIE was re-named RMAP (Radio Frequency, Microwave and Photonics) to combine the broader fields of the radio frequency and optical frequency spectrum applications.

Poly Sat: PolySat is a student run, multidisciplinary independent research lab. We are the CubeSat development team of Cal Poly, an originator and leader for launches in the CubeSat community. A CubeSat is at minimum a 10cm x 10cm x 10cm (also called a 1U) satellite which can be developed for a relatively low cost. This allows students and other research institutions to perform experiments and participate in space exploration. Most of the launches are through the NASA ELaNa program and we have worked with various teams such as NASA Goddard, NASA JPL, SRI and Scientific Solutions. Poly Sat has launched 8 satellites and is actively working on several more. Joining the team is a multi-year commitment but a very rewarding investment in effort.

Society of Women Engineers (SWE) student chapter:  The Society of Women Engineers is a world-wide organization  (SWE International) that advocates for women in engineering and technology.    The Cal Poly SWE branch is one of the most active in the US.   Cal Poly SWE excels in outreach to the community and also project activity such as "team tech".   The SWE group has club headquarters on the second floor of the Bonderson Building 197.  Each year SWE puts together a large event called Evening with Industry where companies from around the US come to meet our SWE members.  Here is a presentation about SWE.  SWE Overview

Alpha Omega Epsilon:  Alpha Omega Epsilon is a national professional and social sorority composed of female engineering and technical science students and alumni from across the US.  It was founded in 1983.  The Cal Poly student chapter was formed in 2010.  The group meets weekly on Sundays to plan out an extensive set of activities each year.

WISH (Women Involved in Software & Hardware) is a support group for female computing majors at the California Polytechnic State University in San Luis Obispo. Founded in 2007, WISH is still a young community that continues to grow each year. Our goal is to empower our technical women and rectify the gender gap in the computing field.  Here is the web site link; WISH

Society of Hispanic Professional Engineers (SHPE) Student Chapter:  SHPE is a US national organization with the mission of changing lives by empowering the Hispanic community to realize its fullest potential and to impact the world through STEM awareness, access, support, and development.  The Cal Poly SHPE student chapter was established in 1978 and continues to be a very strong group on campus.

Engineers Without Borders (EWB) student chapter: EWB is set of international organizations with a mission to be "the beating heart of the engineering movement for sustainable global development, building and evolving engineering capacity throughout the world". EWB-USA was first organized in 2002.   The Cal Poly branch of EWB-USA has international projects in Fiji, Malawi, Nicaragua and Thailand.   Local EWB projects are also part of the organization.